Saturday 8th October to 12th November, 2022.
Every SATURDAY AFTERNOON 2.30am – 5.30pm
- plus a Showcase performance on the evening of 12th November

Over six weeks, the course will guide you through the process of becoming a stand-up comedian, from writing your first piece of material to your debut performance.

Sessions are run by professionals from the comedy circuit. The course culminates with a Showcase, in which you perform a comedy routine to a warm and friendly audience.

[The recommended minimum age for this class is 16. If anyone under 16 would like to attend, we are happy to assess this on an individual basis; please contact us before booking.]

Tickets See the Comedians of the Future - The latest graduates of The Comedy School's Bristol Stand-Up Comedy course present a fantastic show of stand-up comedy - Saturday 28th May, 2022. 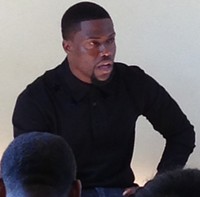 As part of his visit, he spoke to students at LONDON'S COMEDY SCHOOL about how he got started in stand-up, how he built up a fan base including 8 million Twitter followers, how he kept control of his career and what advice he would give to new comedians starting out today.